Something monstrous has been found in the magic world of Wonderland and it wants to get out. 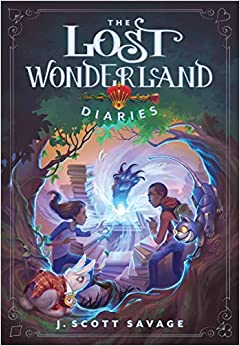 I got the opportunity to interview Mr. Savage about his newest adventure and am so excited to share his answers with all of you, but first... here's the synposis:

Lewis Carroll created a curious and fantastical world in his classic book Alice in Wonderland, but he secretly recorded the true story of his actual travels to Wonderland in four journals which have been lost to the world...until now.

Celia and Tyrus discover the legendary Lost Diaries of Wonderland and fall into a portal that pulls them into the same fantasy world as the White Rabbit and the Mad Hatter. However, Wonderland has vastly changed. A darkness has settled over the land, and some creatures and characters that Tyrus remembers from the book have been transformed into angry monsters.
Celia and Tyrus make their way through this unpredictable and dangerous land, helped by familiar friends including the Cheshire Cat and a new character, Sylvan, a young rabbit. Together, they desperately work to solve puzzles and riddles, looking for a way out of Wonderland. But the danger increases when the Queen of Hearts begins hunting them. Believing the two young visitors hold the key to opening multiple portals to multiple worlds, she will stop at nothing to capture them.
It's up to Celia and Tyrus to save Wonderland and the real world.  It's a race against time before they are trapped in Wonderland forever.
I absolutely LOVED this book, as so did my kids. We give it 10 thumbs up (two for each of us). That's a lot of thumbs!
Okay, no more stalling... here's that interview I promised!
The Lost Wonderland Diaries is filled with so many interesting characters. You had me completely in love with Celia and Tyrus from the start, but as their adventure continued, I found myself picking more favorite characters: Rodrick Entwhistle, Sylvan, Cheshire, Hatter, and Kat, to name a few. While writing, was there any characters you absolutely loved to write?  And is there a character in this story that you felt like you related to more than the others?
It was both fun and scary to write characters Lewis Carroll had already created. I wanted Cheshire to sound like his Cheshire from the books, and March Hare to sound like March Hare. But other characters, like Hatter, were really more how I pictured them then straight from the book. My Hatter was less silly and more eccentric but cool. I always pictured him as Tom Hiddleston in a top hat. The character most like me is probably Tyrus. I got picked on a lot for being different as a kid and escaped into books and libraries.

Going back to Celia, we learn almost instantly that she is a math genius that she despises the library (despite the fact that her mom is a librarian), and then we learn why: she has dyslexia. Can you tell us why you picked dyslexia? And if you have any connection to it?

One of my favorite things about the original Alice books is that Lewis Carroll chose to have a young girl as a narrator. This was groundbreaking. There were young girls in books before that, but never as the main character narrating her own story.

Growing up as a child with undiagnosed ADHD, I wanted to put a neurodiverse character as the narrator of this books. While there are some great kids’ books with dyslexic main characters, most of them are boys. I have a very close friend whose daughter was dyslexic, and I got to hear firsthand about what she learned from it and what she struggled with. That’s a huge part of why I created Celia.

Ultimately, I wanted to show that even though kids are sometimes ashamed about their differences, they usually discover that those differences are a huge part of what makes them great.

There are so many things to love about The Lost Wonderland Diaries, including a fun mixture of imaginative word play and math puzzles. As a kid, were you more drawn to books and imagination, or math and science?

100% books! I loved books and was always daydreaming about fantasy creatures and far-off worlds.

Almost as soon as I started writing the book, I realized I had to appeal to three groups of readers. People who had never seen or read about Alice and her adventures, people had seen the movies, but didn’t know the books as well, and hard-core Lewis Carroll fans.

My first pass was trying to write in the world Lewis Carroll created, using a style that felt like his books. I included lots of nods and easter eggs for the experts, while including a lot of the classic characters for people who knew the movies. My second pass was adding elements that didn’t exist in the original books, but still had a place in that world. My third pass was having Tyrus tell explain to Celia what was from the books/movies and what had changed. I hope a created a story that you can read without any Alice knowledge and still enjoy. Then, maybe after reading my book, you can go back to the originals and discover some of the subtler nods.

Wonderland is full of mysteries and hidden secrets. Are there any secret Easter eggs hidden in The Lost Wonderland Diaries that you could share or hint at for us?

Hahaha! I love Easter Eggs and I try to include a few in all of my books. The first one would be my “post credit scene” hidden at the very end of the book after all of the author notes, acknowledgments, etc. Then there were things like having math knots in the mouse’s tail which are actual math problems that Charles Dodgson published under the title of “Math Knots” and naming my sassy insects Antipathies after a phrase Alice mutters in the original books while falling. Finally, little things like Roderick Entwhistle being a Rod-Ent or The Etiquette And Polices of Tea (TEAPOT.) Also, I often include a nod to an old carpool buddy of mine, Dave Cebrowski, by having him make an appearance in my books.

Towards the end of the book, Celia internally points out that, “in real life,” kids don’t do heroic things. At one point, she thinks “If books told things the way they really happened, the dragon would have eaten the main character by chapter two, the bad guys would get away, and the detectives would tell the kids to stop meddling in their police work.”  Ultimately, however, Celia and Tyrus learn what they need to do to make a change for the better and help Wonderland. I know that I’ve had similar struggles at times when approaching problems—this idea that “real people” can’t do miraculous things, which isn’t true. What would you say to a young reader about taking charge of his or her story?

As a middle grade writer, I try to write what the reader imagines they would do in the story. It might not be exactly what they would do in real life, but it is what’s in their heart. I want my stories to tell kids, “Yeah, you might have to face some hard things in your life, and you might fail sometimes. But failure isn’t the opposite of success, it’s the stepping to reaching success.” Adults underestimate kids all the time. They are the generation that is going to make our world a better place.

Thank you, Mr. Savage, for answering all my crazy questions. More importantly, thank you for writing such wonderful books that encourage young people to keep reading and using their imaginations!
Interested in getting a copy of The Lost Wonderland Diaries? You can find them online at Amazon, Barns and Noble, Deseret Book, and so many other great bookstores. Or, click the image above.
Have a fantastic day, and I hope to "see you" soon!