This book took me by surprise. To be honest, I wasn't sure what I would find, but there was one thing I knew--Melanie Jacobson writes fabulous stories.  And this one didn't disappoint. 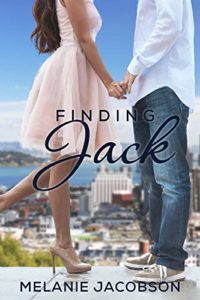 When smart, practical Emily finds herself in the crosshairs of an Internet prankster, her orderly world goes topsy-turvy. Instead of getting mad at the handsome stranger behind the joke, she finds herself drawn to him. But Jack Dobson, though hilarious and thoughtful, has a lot of secrets. Despite her growing feelings for her new and unexpected long-distance friend, his biggest secret of all might be the one that breaks the spell they've been weaving around each other.

I loved the witty dialogue, the online dates the couple went on, and the premise of the entire story. I will admit to missing a good chuck of sleep because of this book.

At the same time, there were a few times I wanted to smack the heroine. In those moments, I feel like the character was behaving true to herself, but differently than I would have. Funny how that makes a such an impact, right?

Overall, I recommend this story to anyone looking for a cute/fun romantic comedy.  It was definitely clean and clever.